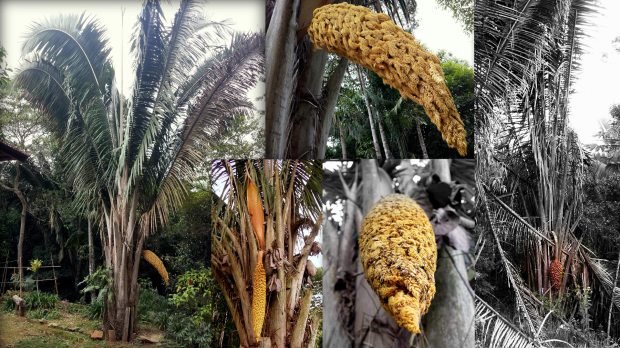 Among the many palm trees there is a very large one called Indaiá (Attalea dubia) and here in Capijuma there are many of them. They grow very slowly, have giant leaves, and they produce incredibly heavy bunches (~40kg) of hundreds of small (6-8cm) coconuts all year around.

After some short lived curiosity peaked attempts, we had neglected them for the longest time we had been in Capijuma and that was for a good reason. Their thick hard shell is a tough nut to crack. In fact in the Mata Atlântica (Atlantic Forest), besides humans with a lot of patience, perseverance, and a big hammer or a good rock, only the squirrels are able to penetrate the Indaiá coconuts. And it is one of the only nuts in Brazil that birds are unable to open. So you can imagine why we didn’t jump at the idea of extracting more than a hand full here and there. 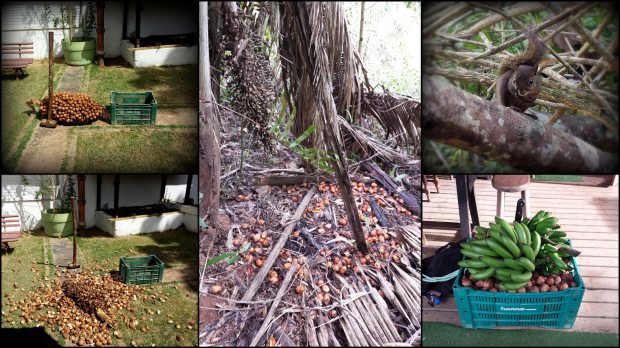 This went on for a long time until one day I just went at it and cracked and peeled them all day long. I ended up opening around 180 of them which amounted to 933 grams of coconut meat (about 5g per nut). When I juiced them I got almost 700ml of extremely creamy coconut milk and a good amount of coconut flakes. The cream is delicious! Its thick sweet creaminess   lends it wonderfully for breakfast, cooking Thai style cuisines, or making ice-cream.

Of course on the one hand in terms of weight that isn’t much for an entire days worth of work. On the other hand it provides a great deal of energy (at least 354kcal/100g)* and it is a 100% renewable food source. The arduous work, especially scraping out the meat from the cracked coconuts, inspired Antonio to experiment with them a little by drying them in the sun and on the stove. After two or more weeks in the sun they do come out mostly whole and make the extraction a great deal easier.

Even though we are leaving Capijuma, hopefully by taking a good number of their coconuts we will be able to plant them in Abadiânia and not have to say goodbye to the majestic Indaiás this soon after we got to know and appreciate them. The magic ingredient until they will produce coconuts is patience. Quite possibly a decade worth of patience.

*I couldn’t find any research analyzing the nutrition content, except for the oils it contains. My guess is that the Indaiás coconut meat has at least 354kcal/100g, which is the official energy content of the regular coconut palm tree meat according to the USDA.

After having lived in six countries on four continents and traveled to over 40 countries on six continents, I now have come to see myself as a citizen of the world. In that spirit, I celebrate diversity and I am eager to continuously learn about myself and the world I live in. On my journey in life, I have obtained a B.A. in psychology with positive psychology as my main passion and interest as well as a minor in Religious Studies and a Buddhist Studies certificate. In addition, I am continuously exploring how to optimize mental and physical health to enhance the quality of life for both myself and the people around me. My interests include reading educational non-fiction books about psychology, physical health, sciences, philosophy, and religion. Among my hobbies, I enjoy playing squash, swimming, running, rock climbing, hiking, biking, and general physical exercise.

View all posts by Hans Rippel →